The only existing artifact related to Christopher Columbus’s historic voyage to America.

The only existing artifact related to Christopher Columbus’s historic voyage to
America will be auctioned privately. Please contact us for more information.

The Bell of Santa Maria

In the spring of 1994, an underwater expedition led by Roberto Mazzara located the site of the shipwreck of the Galleon San Salvador. Using a metal detector, thorough research was also conducted in the shallow seabed in front of the site where the San Salvador sank back in 1555. A naval bell was found and believed at first to be that of the shipwrecked galleon, but subsequent scientific historical research undoubtedly showed that it was, in fact, the bell that was on board the famous Santa Maria, one of the three caravels that had brought Christopher Columbus on his first voyage to discover America and had shipwrecked on Christmas Eve 1492 on a Haitian beach.

Here you can appreciate the historical-scientific work that has absorbed Mazzara’s attention for decades. He has not only been able to meticulously piece together the history of this bell but has also had to defend himself legally from unjust accusations and legal battles. The bell today is fully recognized as his own and proven to be unique and the only one that exists in the world historically and directly related to the discovery of America.

Coinciding with Hispanic Heritage Month, a piece of one of the most significant events in History is up for sale in Miami, Florida: the Bell of the Santa Maria, the flagship that led Christopher Columbus’s expedition to the Americas in 1492. 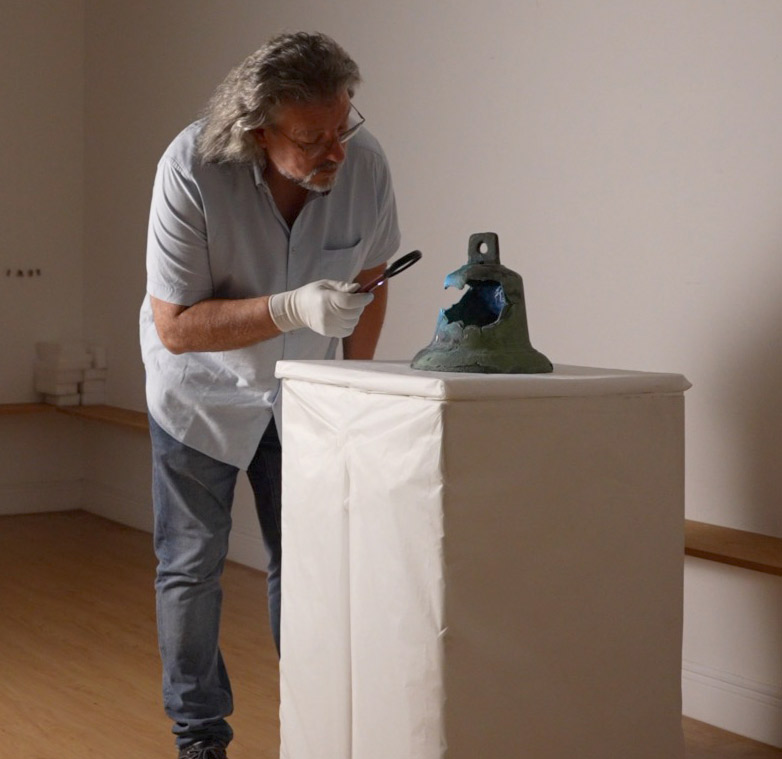 Discovered by the Italian naval officer and diver Roberto Mazzara in 1994 in the shores of North Portugal, the bell is at the center of an epic story filled with treasure hunting, political intrigue, and historical mystery.

“Growing up with documentaries by Jaques Cousteau, I have always loved the mysteries of the seas and being a professional diver, I was able to join these two passions when the hunt for this bell was first presented to me almost 30 years ago. The auction will be a wonderful opportunity to give collectors a chance to own a unique piece of history,” said Roberto Mazzara, former officer of the Italian navy and expert in sub aquatic rescues.

The chemical and metallographic analysis of the University of Zaragoza, the archives of Indias in Seville and Simancas, and the documents that point to the Casa de la Contratación del Rey (a state entity that controlled and recorded from 1503 through the 18th century all maritime traffic between Spain and the Indies) all coincide on the origin of the bell. There is no doubt as to the authenticity of this historic gem weighing just under 31 pounds and just under 10 inches in diameter.

After the kidnapping of the bell and several legal battles, a Spanish court restored the bell to its rightful owner, Roberto Mazzara. The bell is priceless, as there is no comparable historical artifact available.

The bell is making its debut after being kept safe in an undisclosed location in Miami since 2006. Mazzara is making this historical object, the heart and soul of the Santa Maria, available to the collectors in a private auction.

Roberto Mazzara is available for interviews and additional photos and video are available upon request. 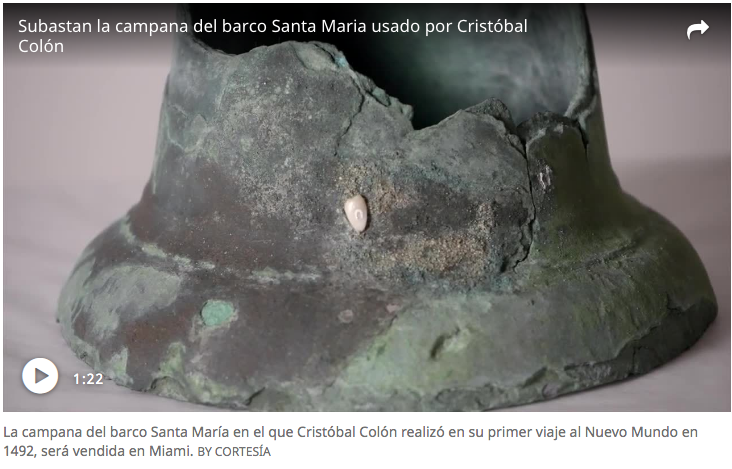 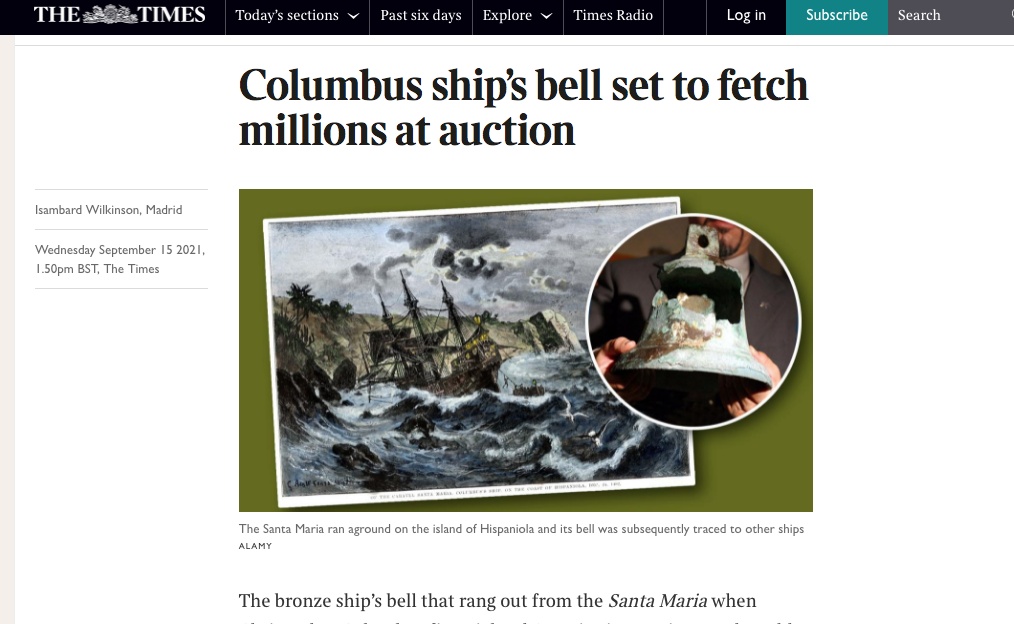 https://www.thetimes.co.uk/article/columbus-ships-bell-set-to-fetch-millions-at-auction-v07kc82zl The bronze ship’s bell that rang out from the Santa Maria when Christopher Columbus first sighted America in 1492 is set to be sold for millions of dollars at auction after a judicial dispute and several attempts to trade it. 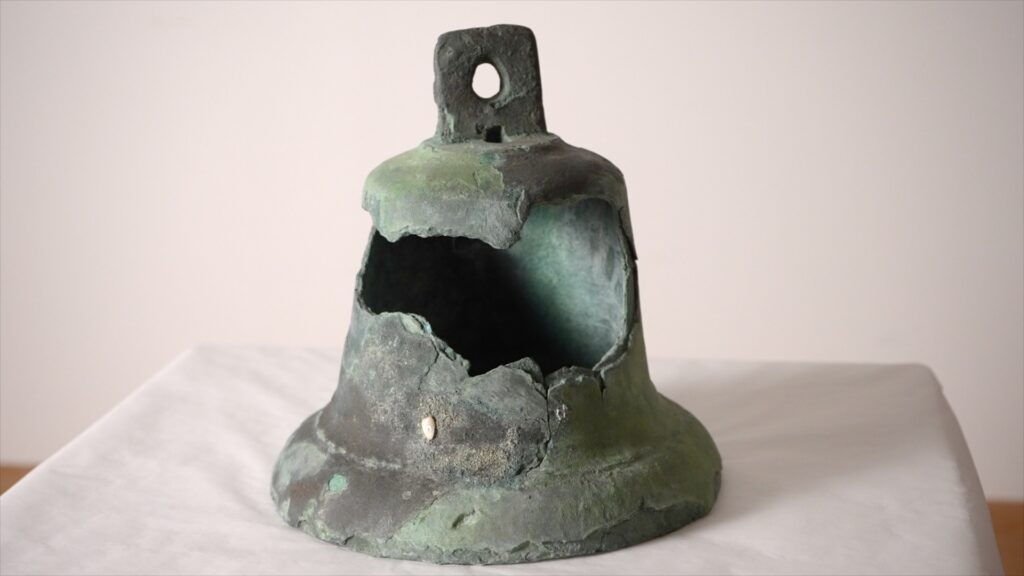 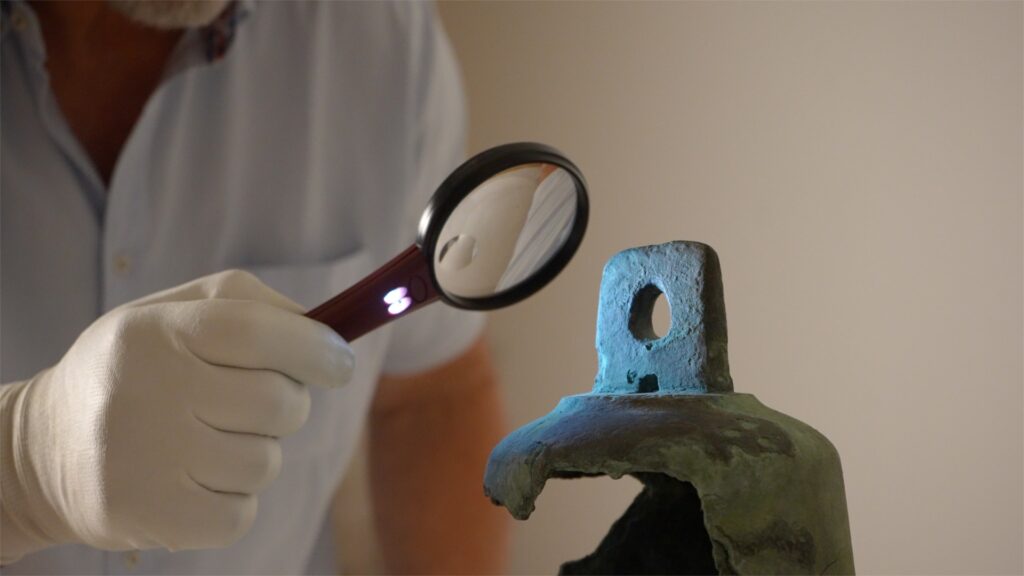 FOR IMMEDIATE RELEASE September 13, 2021 MEDIA CONTACT Helena Poleo Hpoleo@influencecomm.com Ph: 954.559.3079   The only existing artifact related to Christopher Columbus’s historic voyage to America will be auctioned privately. MIAMI, Florida – Coinciding with Hispanic Heritage Month, a piece of one of the most significant events in History is up for sale in Miami, Florida: the Bell of the Santa Maria, the flagship that led Christopher Columbus’s expedition to […]